Some of the material I used for research on Brendan’s Cross are listed in the back of the novel, but not all of them. While my novel is not about the American Civil War, sailing, Bermuda or maritime archeology, there are elements that depend on research of all of these subjects.

The best are firsthand accounts, especially for the Civil War history. Narrative of a Blockade Runner by Captain John Wilkinson, and Running the Blockade by company supercargo Thomas Taylor were helpful for both terminology and accurate descriptions of things that happened on blockade runners. After drafting my first scene of action aboard, I read Thomas Taylor’s account of the captain’s commands and the movements of the officers and even other ships, and I was very proud to have mine verified by his!  A Diary from Dixie by Mary Chesnut, and Diary of a Young Girl by Sarah Morgan were helpful for the home front experiences and attitudes of Southerners.  All firsthand accounts written over a century and a half ago help with the changes in the language which (I hope) occurred in my historic sections in Brendan and Lilién Bonneau’s perspectives and in Jenny Bonneau’s slave narrative in 1936.

The most valuable firsthand account for blockade running was one I couldn’t buy, or even take a picture of back in 1998.  Just like Lillian’s experience in the Bermuda Archives, it was the logbook of the chief executive officer of the blockade runner Talisman.    Another was the book that inspired the very beginnings of Brendan Bonneau’s story – Confederate Blockade Running Through Bermuda – a collection of letters and manifests that were lucky enough to be found and incorporated into a very interesting book before they were lost forever.

Shelby Foote’s three-volume narrative on the Civil War is wonderful, though I admit that I have not read every word. Just like the way he told stories on Ken Burns’s wonderful Civil War special, the entire book reads in the same anecdotal way…as though he’d been there, adding nuance and spice to the historic account and it is impossible not to hear his voice throughout.

Of course, I read many articles, all the WPA Federal Writers’ Project narratives for South Carolina that I could find, and visited countless websites that helped augment my research, but these books provided a good part of my technical and historical foundation to Brendan’s Cross. Now to start on a library for the next big book… 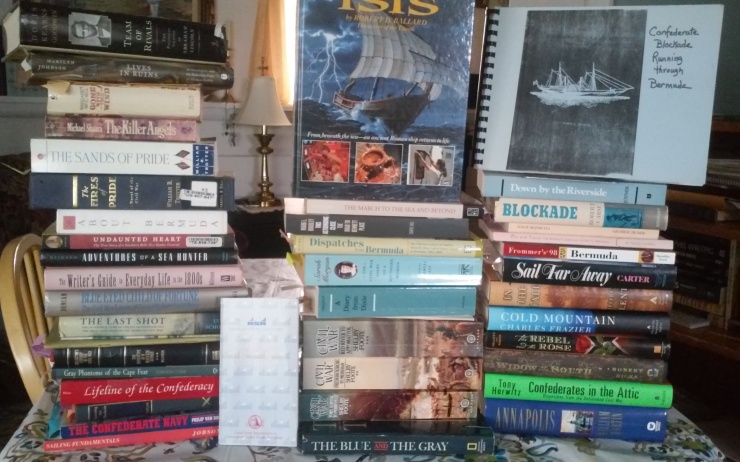